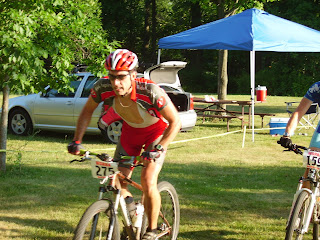 All done, but riding hard for the beer cooler. Love the full zip, feel very European. 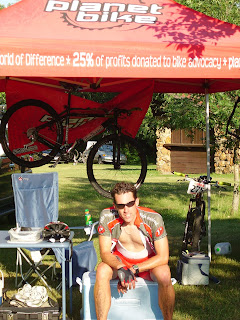 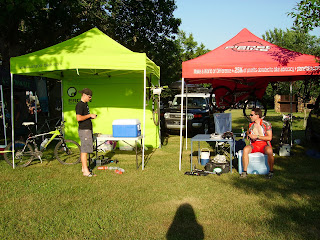 Thats a lot of green and red, but you sure couldn't miss us. Spread the word on a lot of Van Dessel, Planet Bike and Ergon products. 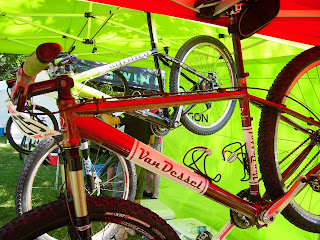 Yeah, I had to put a front fork on for this one. 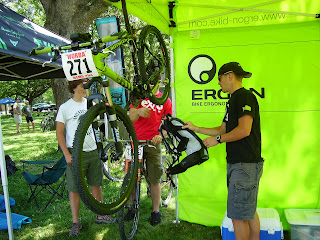 7-7-7 good luck, bad luck I don't know but one thing is for certain it was a crazy day. This weekends race was held at Blue Mounds State Park just 25 min south of Madison. Blue Mounds is the second highest peak in Wisconsin not to mention the edge of the last glacier that receded from the area thousands of years ago. This little gem is important because Blue Mounds was left with all the boulders and rocks that were at the edge of that glacier. This fact becomes more apparent when you see the average speeds for the race were around 7mph. Ok Ok, enough Wisconsin history. This race was as much bike business as racing for me, the race was sponsored by Planet Bike and Ergon just to name a few, but these being 2 of my sponsors I decided to show up way early so I could demo all the Van Dessel bikes, Ergon Grips, and hand out Planet Bike catalogs. I through my tent up next to Jeff, sat back and started hydrating while we shot the breeze for the rest of the morning. While we were sitting there I ran into a local friend of mine who saved me last year when I double flatted. John came along last year gave me a tube and a pump which save me from dropping off the podium. I had seen him a hundred times since, but never got a chance to repay him, so when he came by I handed him a 3 pack of Planet Bike CO2 and a Planet Bike Air Kiss. I was happy to get him the stuff, but by the 2nd lap I was trying to take it all back. Keep reading. As we got close to the 1pm start time temps were starting to close in on 95 with humidity to match. I must say that by now I was very glad I was racing the 6 hour, at the end of the first lap, I was thanking all the gods that I decided to race the 6 hour. We started Le Mans style of course, however everyone was running full steam to their bikes because the race begins with a wicked decent, one crash there and you were stuck. I got on my bike and was back about 5th, made it into the woods and was trying to stay with the leaders, but they were still getting away. I was amazed that everyone was pounding so hard on a course that was so rough on a day that was so hot. I decided I would go hard the first hour or two and then settle back in. About 15 min into the race I turned a corner to see Jeff from Ergon staring down at his bike, I asked if he was Ok and he told me he flatted and had lost all his co2 on the decent, I pulled over handed him 2 of mine and a adapter, he thanked me and told me to get moving. I still had a mini pump so I didn't sweat it. On the second or third lap I suddenly felt something different, my jersey pocket was lighter, I had ejected my mini pump and now I was sweating it. A few minutes later Jeff came around and informed me that he had double flatted, but was now back in it, I asked him to leave me a couple of COs when he got back to the pit because I was out and pump less. The story has a happy ending for us and some kind of message I suppose, Jeff went on to win it. He put down a huge effort to come from behind and deserved to win it. I was the 1st single through and 4th overall so I was still plenty happy even though I would have really liked to podium overall on the single. I really like to help my sponsors out, but come on, I have never actually helped them knock me off the podium before.
Great day of racing and congratulations to anyone who even finished the race. Nice job to the promoters for coming up with one of the biggest give-aways this year. If you haven't been to Blue Mounds be sure to get there, I guarantee some of the most technical riding you have Ever seen anywhere.