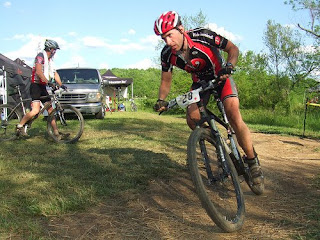 The above Photo comes from Jeff Kervove, be sure to link over to him for tons of great pics. More pics later this week, if I can find my camera.

After many hours of driving and a day of sight seeing in the Honky Tonks of Nashville we finally arrived in Fayetville for the inaugural SSUSA race. I had planned for a fun light atmosphere, but had not planned on it being debauchery on wheels. The first stage consisted of a 8 mile loop, chug a PBR then head out on another 8 mile hammer fest. At the start I could see that myself and a few of my bare knuckle friends were a little over kitted for the festivities, the attire dejour was more like superman costumes or drag queens. After the first 8 miles I was sitting comfortably in 5th with 6,7,8 hot on my heals, but my true Wisconsin training helped at the beer slam were I promptly put a minute on the chasing posse. At the finish I came in still holding 5th and qualified for the second round of pain, the HILL CLIMB. In this stage we followed a rabbit on a bicycle to the start of the hill were he yelled, "go" we pounded up to the top were at almost the summit I got kicked off my bike and ran it out. I finished 6th, wich should have put me in to the final round, but as is the right of any organizer of an event like this they can determine who goes and who stays. Several of us were then informed at the top that this was a bike race and not a foot race, didn't we mention that at the bottom. Oh well, no round 3 of jousting and brain beating, but it sure was fun to watch other get beat up on.

The DSG, should be renamed MSG cause it was mud fest central for awhile. The night before it poured buckets leaving the course a muddy slick rock strewn mess. At the gun I got a good start and stayed in the grass, avoiding the mud, but as soon as we hit the trails it was over. The mud began to collect and I spent more time walking than riding. I regretted not grabbing the single for the first lap, but I had made my bed. After and 1 hour and 40 min I finally crawled in and handed my bike to my dad, grabbed the single and took off for lap 2. Taking the single on lap 2 didn't exactly speed things along for me, but I got it done, got back in, grabbed my clean bike and took off. I would like to say that things got better for me and eventually they do, but for much of the day I continued to suffer from the rising temps and high humidity. Although others might laugh at 75 or 80 with the same humidity I hadn't ridden but 1 day over 70 this season. In fact when I left Madison it was 50 so the 30 degree jump was a shock to my sweat glands. Anyway I suffered along until about 4pm when suddenly I just started feeling great, the course was dry, the humidity was blown off and I could breath again. So I stopped limping and started racing. I could actually feel myself coming back after 8 hours. I started posting my fastest times and just kept it pushing till the end. It was a little late but I was glad to feel myself back and finish with my last 4 hours faster than the first. In the end I was 10th Pro, much worse than I had hoped for, but a really talented field made for a great race. I mean when you turn your head to one side and see a world champion and to the other a national champion and then look down the row and see the other top 4 or 5 in the country you have to cut yourself a little bit of a break or at least I did. Well that one is in the books, time to heal up, fix bikes and get ready for the Mohican.

Thanks to my Parents for all their help, without them I would still be there cleaning my bike and packing up. Thanks to Van Dessel, Ergon and Planet Bike for getting me the best equipment on the planet.
Posted by L5 Racing at 8:13 AM