Grit your teeth and go, this is the problem being in the bow, you don't know how good a time your team mates are having, look at them smile. 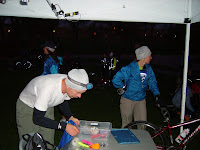 Thanks Planet Bike for shedding light down on us, we have 3 head lamps zip tied to the EZup. 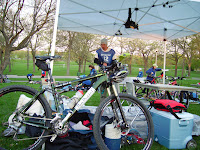 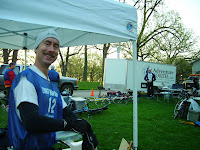 Ryan, calm as a Hindu cow, then he went in to full on race mode. 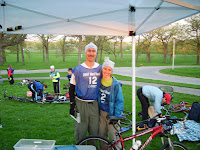 This is Ryan and Karin at the Start, she is super tough, she paddled, ran, and biked like a crazy person. I was just blown away. 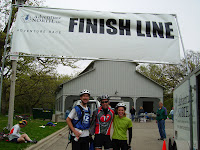 Its all over, 7.5 hours and 4th place. 1min down from 3rd. Damn sodukus, just read on to find out why we hate them. 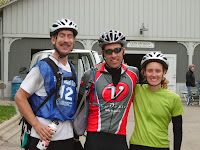 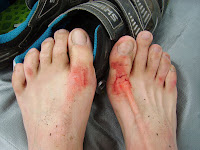 Yes, these are my feet and you can have them if you want. No time to complain just keep going until you can't feel them anymore.

The Madison Mad Dash Adventure Race held by Adventure North was a new experience for me. I really enjoy canoeing, running, biking and getting lost for hours at a time, but never all in the same day. On Sunday May 6th, however I got a chance to do all of it as fast as possible. My friends Ryan and Karin talked me into competing in this years urban Madison Mad Dash, I had no other races on for the weekend and thought it would be a good challenge and a decent way to clear my head as well as do some cross training. I figured it would be a nice little cardio race with no real physical trouble. I was wrong!

The day called for temps in the 70's with light winds however this is why you should never trust the weather guy. The winds held above 20 for most of the morning and the temps never got above 60.

We got to the site at 4:30am on Sunday to start setting up; we zip tied 3 Planet Bike Alias headlamps to the inside of my Ezup to create command central. We needed as much light as possible to see what we were doing and with 3 headlamps shining down on us we had it. At 6am the gun went off, the 3 of us had to run in different directions and return to base camp to start plotting our course. I took the long route Karin the medium and Ryan the short. Ryan was our captain and navigator so he needed time to plot points on the map. I ran for about 2 miles as hard as I could to retrieve a bike map that I wound up destroying when I fell in the water, but more on that. I like to run long distance so going all out for 2 miles was a little bit of a shock, but I managed to hang in there comming in about 6th or 7th back. We all met back under our tent where Ryan plotted our check points for the day. He finished the plot points and we grabbed our stuff and were off. We ran with our paddles and PFDs for about 2 miles to a small lake. When we got there we jumped in the canoe to start paddling to our check points. We found our points, punched our passport and started off toward the the last point on an adjacent creek. We decided the fastest way to get there would be to portage the canoe, then paddle and pole through some shallow swamp land. I have paddled in this lake for years, but I had no idea this area between the lake and the creek even existed. We slogged through mud and muck up to our knees filling our canoe and shoes with black sludge that smelled of things that had died a thousand years ago, when we finally made it to the creek on the other side no other boats were in sight. We had created a huge time savings. We paddled downstream to the bridge where we believed the marker to be, but we were so focused on the bridge that we paddled past the marker. I got out at the bridge ran up one side then to the other, on the way back down I slipped on some rocks and fell side ways into the freezing water and subsequently destroyed our bike map. As it worked out we new the areas we were biking in and the map became less critical than it could have been. We finally saw the marker behind us; we back paddled then headed back up stream to portage another ¼ mile to the next lake. We dumped our canoe in and headed off back to the transition area to get to the biking portion. By this time the winds had picked up to a nice and steady 30mph. We beat over 3ft swells with water spraying over us and paddling as hard as we could just too move a few inches at a time. We dug in and finally got there about 20 min later. The entire canoe portion took about 2.5 hours, but seemed like an eternity. We grabbed our bikes and rode for about 15 miles to the next check point were we did an orientation for about an hour. At this checkpoint we had to find 12 markers in the woods, we ran as fast as we could through brush and thorn bushes finding markers, then it was back on the bikes for another 15 miles. Ryan ran with the map in front of him the entire time taking us to each point like a pro. After we got back and got on the bike we rode another 15 miles finding various markers and recording them in our passport. When we got to the next checkpoint we had to do an urban orientation. Here we were running all streets and sidewalks. We ran for 30-40 min finding answers to question given to us, such as: who created the sculpture at the top of Basset Hill? We did have to find the name of a Sorority and I have to say my team almost lost me there. Ok back to business. After we found all the points and answers we were off for another 10 mile ride to the final checkpoint for a mystery event. At this point we were sitting 3rd of 26 teams. We were only a few minutes down from 2nd and 3rd and were pushing hard to find them. Everything fell apart when we got to the last checkpoint and the surprise event was a Soduku. None of us had ever done one. We watched the 4th place team roll in 15 minutes later and leave before us. We finally finished it and pushed off to the finish line as fast as we could, but it was too late, they beat us by 1 min. Trying not to sound like a sore loser I will say this; our team physically took 3rd place, but since we spend time training and not working on cross word puzzles and sodukus we had to settle for 4th. We were all still happy to be in it to the end as there were a lot of very strong competitors in the field. In the end I under estimated the beating I would take, it was as hard as any 12 or 24 hour race I have done. The total time was 7.5 hours, but again it seemed like much, much longer. They asked me if I wanted to do it again, but I just replied “ask me next year after I have time to forget.”

Some tech stuff, I ran my Van Dessel Jersey Devil FS because I knew I would need the gears if not the suspesnion so I ran the front up to 100psi and the rear at 150psi. This basically made the bike act more like a soft tail than a FS. Since the course was mostly road and easy trails I would run the back end even higher next time to really firm it up, but its great to have the option. From Planet Bike the saver was the full finger gloves, I used them durning the canoe portion which kept my hands from turning into bloody stumps.

All and all it was a great event and a great way to spend some real quality time with friends.
Posted by L5 Racing at 5:44 AM