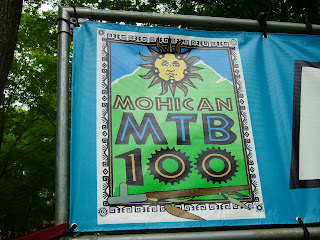 Race Report at the bottom of this one. 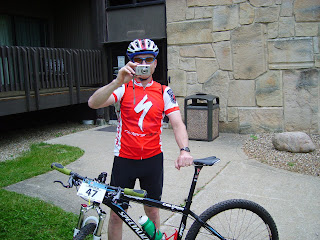 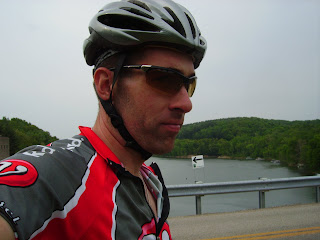 Ya see that little sign in the back ground, thats what folks tried and many times failed to use as the guide for a 100 miles. Great race but sketchy directions led a lot of people the wrong way. This is the big sign, most of the markings were 3x5 size. 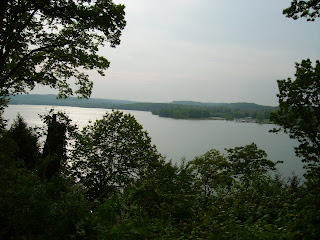 Some of the most lush and beautiful sceneray I have ever seen. The course was top 3 for single track and beauty, be sure to put this race on your must do list. 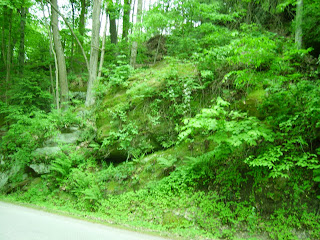 Everything lush green, I felt like I was in BC again. Thats a boulder in there. 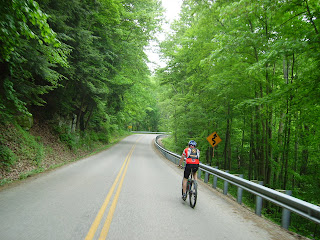 Scott and I making it out the day before for a little pre ride. 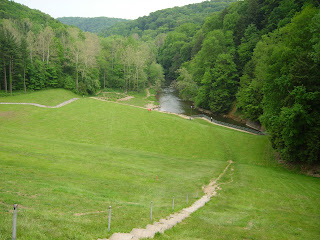 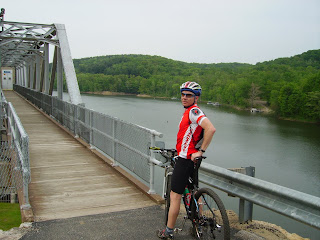 The night before the race we were treated to another pre race day thunderstorm that poured on the area most of the evening. Luckily Scott and I had decided to enjoy the comforts of the Mohican Lodge so we were spared the deluge that drove most of the racers from their tents and in to their cars in the middle of the night. Come sun rise the clouds parted the rain stopped and the temps jumped right into the 60's. We drove to the start of the race located about 15 min. away then made our way to main street for the 7am start. At the gun I pounded away with a small group of about 10-15, I felt great but didn't need to be a jukebox hero off the front. I decided better to be away from the group, but not blown when we hit the single track. As we got about 1/2 up the climb I looked back to see that we had put about a 50ft gap on the field, great I thought this will be a good cushion when we get going single file in a few minutes. I turned my attention back to see Landis pass me on the left, my only thought was, "I don't care how today goes I just need to beat him to the top of this GD hill." With gritted teeth and not O2 going to my head I did just that. As a side note, Floyd was staying just a few doors down from us so we had a chance to chat it up with him the night before, all the controversy aside I can say he was really down to earth and a very nice guy to shoot the bull with. Ok back to racing, the course handled the water really well, no packing mud just sloppy slinging mud that you could deal with. I hit the single track top 20 and feeling great. The single track was the one of the best I have ever seen, the climbing was tough but switched back so perfectly that you were able to get a great flow going the entire time, in fact flow riding is the best way to describe the course, no hard stop, starts, just flowing beautiful single track. This went on for a 25-30 miles and then we hit a section of open gravel and paved road, now you would think that would be a blessing, but you would be wrong. What the new section lacked in rock and roots it made up for in spades with climbing. I have ridden in the mountains and must say I think this was just as hard maybe harder, no long winding climbs, just 1-3 mile 15% climbs again and again and again. As I was cruising along on one of the few rolling sections I looked behind to see a small train of 4 people headed my way, I immediately stopped the hammering and pedaled easy until I got caught. I fell on the back of the train that was now tearing down the road at 22 mph, this is what I had been looking for. I sat in until I got my legs back then yelled to the others that we should be taking pulls, so I came up and tried to start the rotation. This fell upon deaf ears or maybe just strong mtbers with no road experience because it quickly disintegrated with 1 guy wanting to hammer the whole time. I didn't want to rob him of his fun so I just shut my mouth and sat at the back enjoying the ride. We are now cruising along when DISASTER STRIKES, my chain starts skipping and then throws. I get off watching my free ride disappear. I clean out the mud in the front ring get back on and more skipping and dropped chain. I get down again and discover that the chain link is bent out from the pin and I can't bend it back. I decide to try to limp it to Aid Station 3 which I know is 10 miles away. I don't have a chain tool because of course I left it in my Ergon pack which of course I ditched at the last aid station. I get 3 mile down the road onto a fire road climb when, pop! Chain snapped and I'm screwed. I got a chain tool from a guy who was cool enough to drop it to me and continue on. I spent the better part of 30 min getting it fixed then limping into aid 3. I felt really good and decided that it hadn't been making to much of a fuss so I decided to continue on, I got about 2 miles away when it started crunching again, I got off and it was again bending away from the pin. My day was over, I rode back to aid 3 and caught a ride back to lodge. Had the chain broke again and I'm most certain it would I would have been screwed, unlike a lap race you are out there and you better have what you need or a way to get back and I didn't. With 20 miles between checkpoints I had no desire to walk my bike out so I decided to call it a day. Oddly I didn't feel that bad, I was disappointed because I felt great and was doing well, but made a bad decision on equipment. This was the first time I had run a shimano chain in 5 years and it will be the last. I had never broken a chain, but now that I have it serves as a good reminder to make sure I have the tool with me at all times.


Scott had a good race finishing 27, he didn't feel very good for the first 1/2 and got stung by a bee on the second half which he is allergic to so he had to stop and take some anti swell up drugs, but for the 1st race of the year and the first 100 mile point to point race he did great. I know we both learned a lot from this type of race. He will get a chance to put his new found knowledge to use in a couple weeks at the lumberjack and me at Levi Trow.

We had a great time even though we hoped for better, a great course, great people, and free beer what more could you hope for on any weekend.

Thanks to Van Dessel, Ergon, and Planet bike for the best products out there. More on how well their products held up tomorrow.
Posted by L5 Racing at 9:08 AM

Sorry to hear about your misfortune. Glad to hear you're taking it philosophically -- great ride to that point! See you out on course!