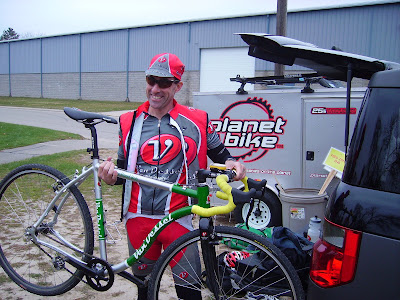 Saturday was the Wisconsin State Single Speed Cyclocross Championship. The race was 40min long and had 14 riders making it the larges single field of the day. Temps were in the mid 50's making it perfect for cross. The course was mostly flat with a ton of S curves and sweepers, this fact I didn't fully appreciate until the day of the race, had I know it had so many curves I would have traded the 38x16 for a 38x17, but you know you run what ya brung. At the gun their were 4 of us away, we just kept hammering back and forth trading places, you could tell who had the advantage at each part of the course and each of us were trying to capitalize on the other weakness when ever possible. 1 rider from PCW moved up about 100 meters and 1 rider, Zach of ZR cycles fell back about 100 meters, leaving me and a Cronometro rider to battle for 2nd while still trying to bridge up. We went back and forth every damn lap until the final lap, when I put him on my rear wheel going into the final turn then into a slight uphill finish. I pounded as hard as I could, but he was running just a little smaller gear and was able to spin it up to me, we both lunged for the line, but he grabbed it just inches ahead of me. It was a great battle and Bob fought courageously but we were relegated to third place. Lots of people came up to the truck afterwards to admire Bobs lines or I should say curves, I spent a ton of time telling folks how the bike is the perfect all round commuter, cross, winter training bike. Well 1 more cross race then its off for a few months, I may head down to Texas, Arizona, or possibly California for some earyly marathons, but we will see what I have in the tank after next weekend. 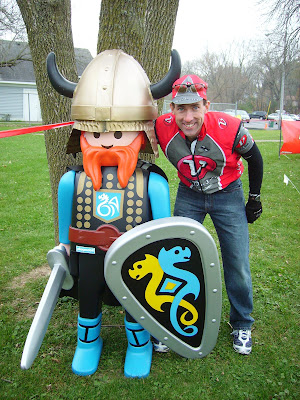 Biking like a Viking was the Theme for the Day. Think there is lead in this guy? 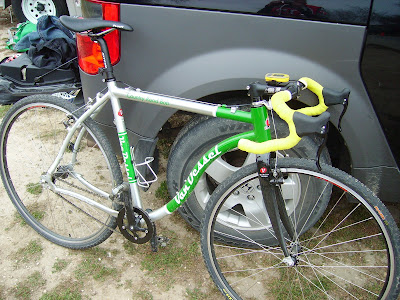 Only the top tube and seat tube are straight, everything else is as crooked as Ken Leigh in a pretzel factory. 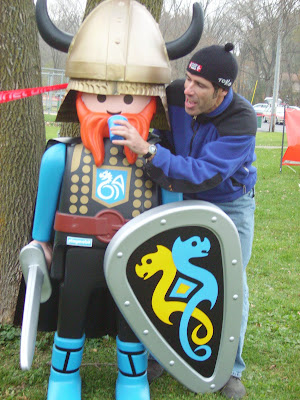 My buddy Ben may have had a little to much free beer. 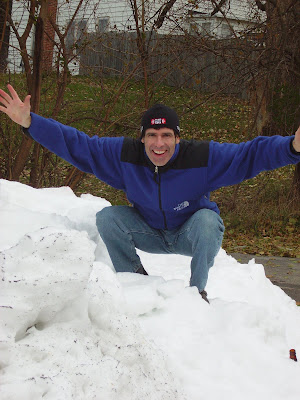 We HAVE SNOW, time to put the bikes away and wax up the skis, hey we aren't picky, sugar, flower, sand, coke, if its white we'll ski on it.
Posted by L5 Racing at 5:48 AM