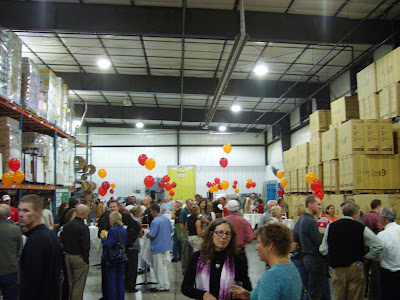 This is the main warehouse for the Saris Gala, it was great to see all my cycling friends, competitors, and even sponsors like Planet Bike all in one place. 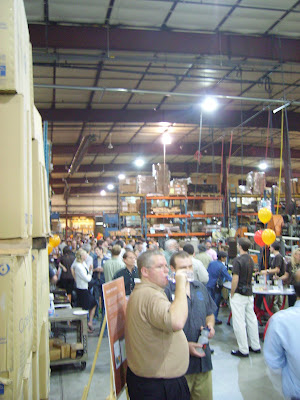 What kind of party would it be without lots of beer and wine, the hit was the blend your own margarita by biking on a trainer hooked up to a blender mounted on a Park work stand. I think the engineers over here have to much time on their hands. The event had a silent auction with all sorts of goodies like bikes, carbon cranks, Hayes brakes, on and on. We donated 3 one hour massages which raised about $150, so we were really pleased that the bids went close to the actual price. 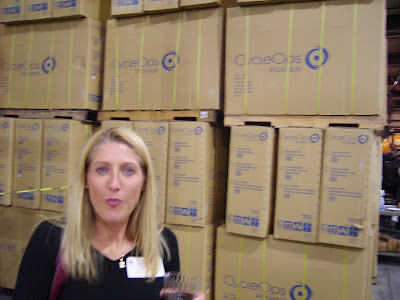 Jill mid chewing, she hates the picture, but a mountain of CycleOps Power bikes is to much to pass up. 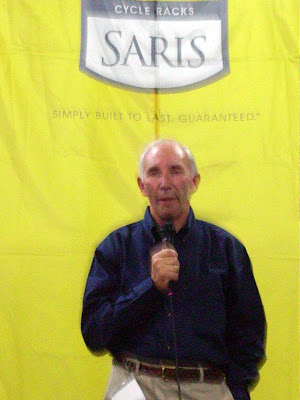 Sorry, Phil I didn't set the resolution high enough, anyway this guy is like a 1 man comedy show. He just came out and told stories, nothing prophetic just funny as Hell. I didn't think he could be more entertaining than he is at the Tour, but bugger off cause he is, especially when the comedy is for an adult audience minus the FCA. The biggest bomb shell of the night was that he point blank thinks Landis is innocent, no matter what you think, when someone like this says Landis is innocent you take note. 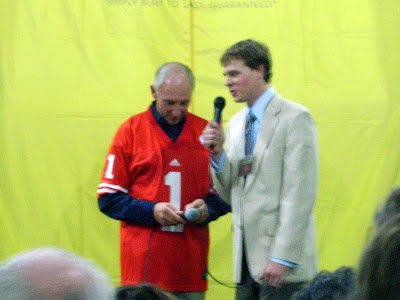 Here is something you won't see ever again, Phil in a Wisconsin Jersey. Of course they also gave him one of those damn cheese hats as well, funny, but this is why we get made fun of. Phil auctioned off 2 autographed bikes, I went $400 for one, then it went for $500, $700, $1000, sold! This happened twice with bikes valued at around $250-$300, but they were signed. They even auctioned off his broken 10 year old suitcase with mystery prizes inside, it went for $10,000, yes that correct $10,000. The final tally for the night was around $55,000 raised for the Bike Fed of Wisconsin, proof that we are crazy about cycling here. Even Phil said so.
Posted by L5 Racing at 1:13 PM