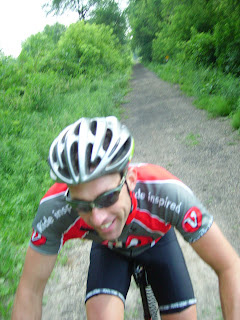 A little blurry but this was a behind the back over the head shot from Ben, not bad. I should have shown all the pictures of the bushes he kept running into to try to pull this off. 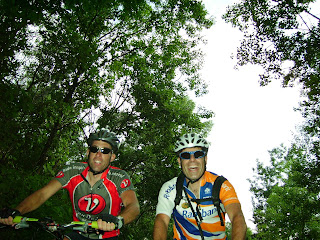 Madison is consistently rated as one of the most bike friendly cities in the country. Magazines like Bicycling and Outside always put it on the list and sometimes at the very top for great places to live. Mad Town is littered with bike paths and bike routes which is one of the reasons it always get so much attention. This new bike path will extend from Madison to Free Port Illinois, which is about 120 miles away give or take. I have been riding the trail since they pulled up the tracks and as you can see things are progressing nicely. This is Ben on the right and my Cousin Jay is wearing the QCBC jersey, you might recognize their mugs from TOMRV. I took them out on the trail this past weekend so we could get a look at how things are coming along. Much of it is still in development so we had to do a little bushwhacking, but then the trail turns to fine gravel then to 4" rock. When we got to big rock our ride was over, but the good news is that they are starting to pave at that point. We got about 20 miles in before having to call it a day, but soon we will have a straight shot to the land of Lincoln. I really enjoyed the single track that I had to myself, but anything that helps get more people out riding, well I'm all for it. 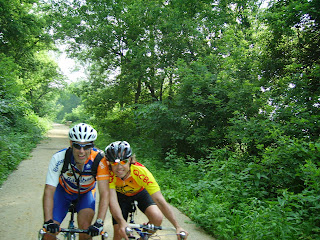 Jay gives Ben a little nudge for the finish line. 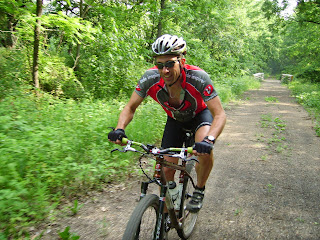 They had cross bikes and I took the Single, I love this bike. 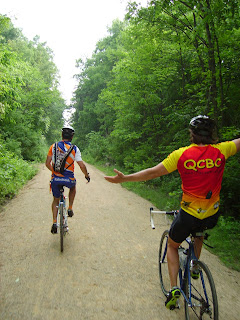 Arms wide, Jay shows the love for the new route. 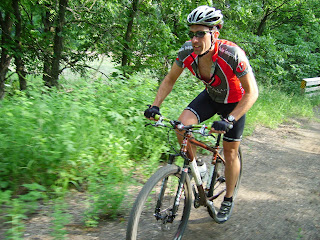 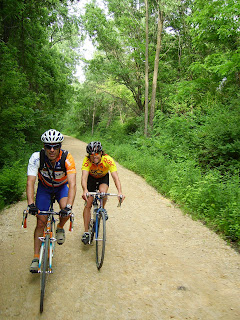