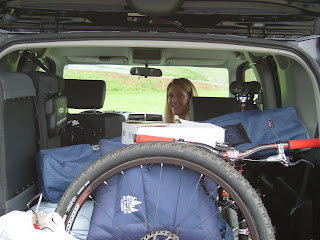 Everything packed up and ready to go. 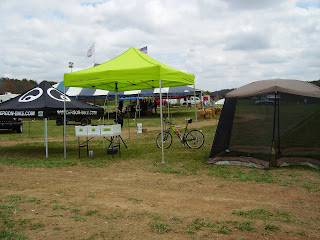 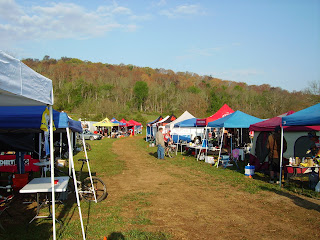 Pit Row was a virtual who's who of top riders. 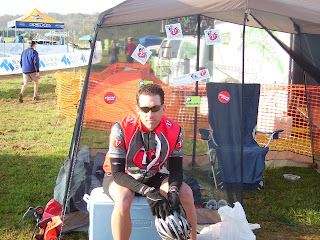 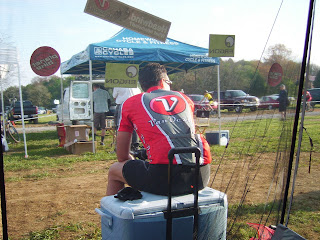 So if you haven't seen all the posts yet here is my little corner of the race. We arrived the day before to pre-ride and get things dialed in before the race. I knew racing single full rigid was going to be hard, but I was sure that I read the course was smooth single track. I READ WRONG, it was fast enough, but so rough on the descents I thought I was going to lose all my fillings, in fact I knew I was in trouble when I pulled the bike out of the truck and Jeff Kerkove, Ergon, said "oh you poor bastard." A quick side note is that I picked up my Ergon Grips the day before the race, had I not had those grips on the bike I would have surely died. Anyway I went out and rode the course and quickly discovered that I had brought the wrong gear, 32-18, with 1500ft of climbing it was just a little to tall, but I now know that. Yes, I should have brought a 20, but I had been on the bike for 2 weeks prior to the race and thought a 18 would be suitable, but I was wrong and today I ordered the whole set so I will be prepared next time. The day of the race was beautiful, cool winds, clear skies, and temps hovering in the mid 70's made for a perfect day. I felt great all day and pounded it out as hard as I could. I lost some time with the gearing and with the lack of front suspension, but I was still really pleased with my performance and with the bikes. I had less than 2 min off the bike time, just a change of shoes to stop some blisters and a couple quick stops to grab food and that was it. I was really amazed that I was still climbing everything at the end of the race that I was climbing at the start. The decreasing lap time came from heavy breaking on the descents and the cross over because I had to keep the pain in my arms from reaching the breaking point. I knew racing rigid would be tough, but I wanted to see if I could do it and with a really good bike and grips under me I did. For my first single speed race I finished up 5th out of the 5 pro single guys and 10th of 13 in the pro open but still couldn't have been happier with the ride. I know riding fully rigid is a little harder, but it does have a coolness factor that is really hard to beat. Be sure to get to this race next year, they have bands, helicopters, the greatest shwag bags I have ever seen, give aways, money, and really really great folks. Big thanks to Van Dessel, Planet Bike,Ergon and Jill for getting me to the finish line. Gotta get out of here and get packing for a 12 hour adventure race this weekend, no rest for the wicked. Will post some of the other fun stuff from the weekend like Graceland on Wed.